Yeah, late. Again. I’m soooooorry. I had intended to do a piece on Code Enforcement but the Federal election got me thinking about the parallels with Des Moines and unlike most weeks, where I just whip something off in an hour, I actually spent some time choosing my words fairly carefully. 😀

Tuesday: Port of Seattle regular Commission Meeting (Agenda) This meeting finalizes the 2021 Tax Levy. Their Budget proposes to increase  this item on your taxes by 3%, which I find outrageous given the pandemic.

Thursday: Environmental Committee Meeting. The single item will be a Storm Water Comprehensive Plan Update presentation, which I am quite interested in given the various infra-structure problems we’ve had over the past year.

Friday: Airport Summit organized by State Rep. Tina Orwall. This included activists and electeds from the Sea-Tac as well as East Boston (Logan Airport.) Just to give you a reminder of what we’re dealing with, have a look at this environmental risk map of the area. Notice how Des Moines is the worst? The problem is that civic leaders have traditionally ignored these problems-maybe out of ignorance, or fear of scaring people off or just feeling powerless to do anything. But whether it’s in our job description or not, I feel like your City Council must do more and I am proud to see our State legislators: Orwall, Johnson and Keiser taking it up. 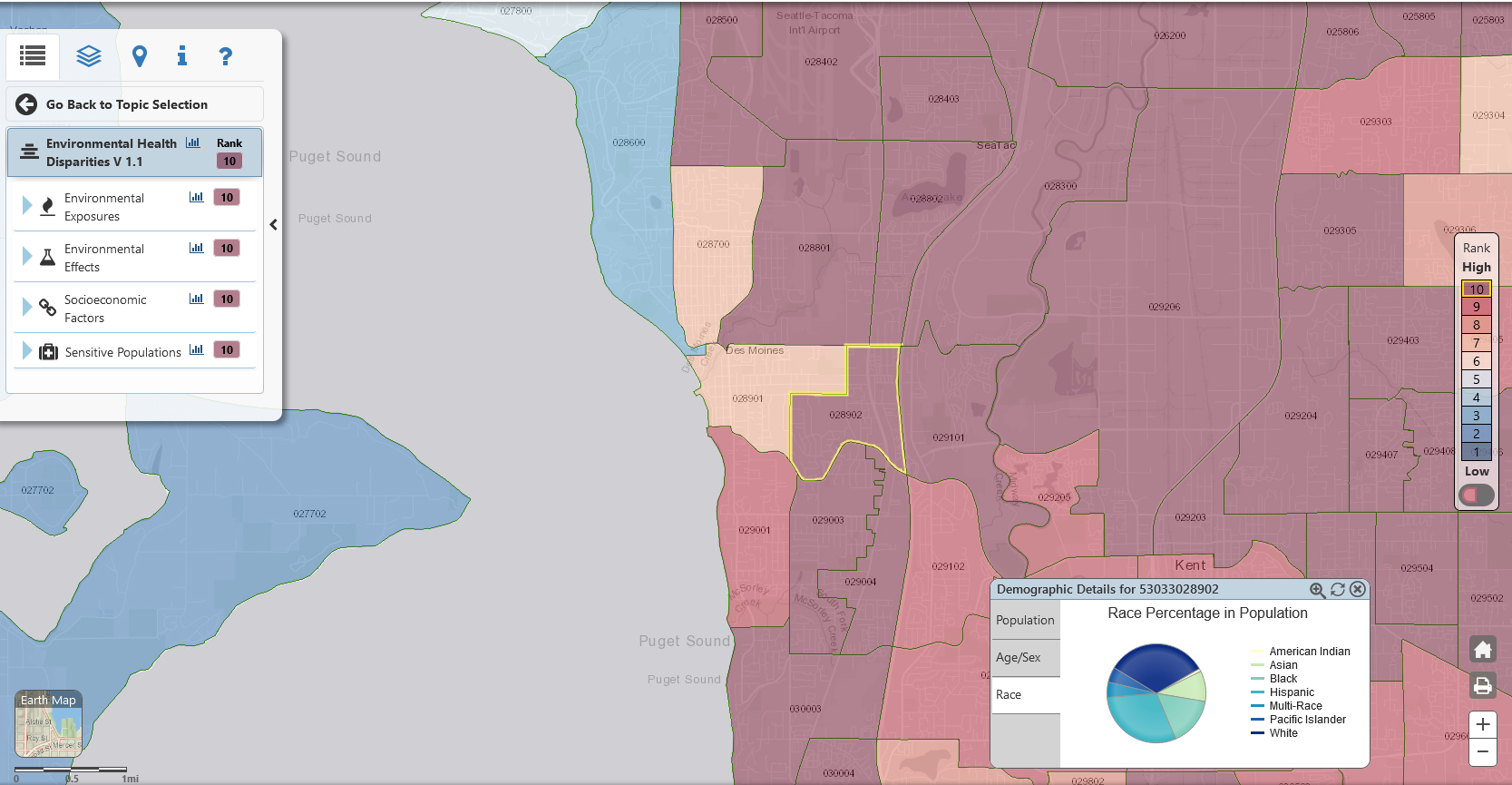 For me, this week has been an eerie flash back to my own microscopically tinier election last year. Representative Adam Smith once gave me a piece of advice. He said, it should take you as much work to get elected to City Council as it does to Congress. He wasn’t just whistling Dixie. 😀

Like the President-Elect, I also did not have anything to rejoice about on election night. The race was very close and I didn’t feel comfortable in declaring (cough) ‘victory’ for several days. And then there was the small matter that, like Mr. Biden, I also knew that I was heading into very divided government.

As you know, the Federal government, has all kinds of built-ins that force the majority to take the minority’s ideas seriously.  A major component of our Constitution is to make sure that the majority cannot run the table.

But City government is not like the Federal government. There is no built-in ‘gridlock’ because our form of Council/Manager government is more of a parliamentary system (like Great Britain). If you attain four loyal votes on our Council, you have the ability to run the table. There are no built-in protections for the minority voice. The only ‘rights’ the minority position has are based on all those ‘social norms’ you’ve heard so much about over the past four years in the other Washington.

How do you feel?

Love him or hate him, the fascinating thing about Joe Biden is that despite the evidence of his own eyes he actually still believes in compromise. He gets scorned by people on both sides of the aisle for either being terribly naive about that or for being willing to compromise where he shouldn’t.

So the question I have today is: do you really believe in ‘democracy’ like that? Because if you do, you have to be willing to accept really crappy outcomes sometimes. Sometimes that is all that is possible in a system where the minority has a voice. But if you really don’t care about compromise you need to either win all the seats or engage in dodgy ethics. And since neither side has a hope in hell of doing the former, there is always the strong temptation to do the latter. After all, you want to get things done, right? Ends justifying the means and all that.

The thing I increasingly hear from both sides of the political spectrum is that there is a lot of appeal to this. The situation is so dire now that they just want to get things done.

(Boy howdy, do I feel ya on that one. There are issues where I’m like “Tick tock! We’re running out of time!” If only I could become Emperor. Just for a day. Is that too much to ask? 😀 )

Meanwhile, back at the ranch…

With regard to national issues, Des Moines is divided just like the rest of America. But unlike much of the country, DM has a pretty amazing cross-section of America–all in one small town. We’ve got it all here. (I think I’m fairly qualified to make with this half-baked punditry because I have talked to so many of you.)

So when thinking about local issues, the question I always come back to is, “How much do you care about good government?”

See, President-Elect Biden is about to walk into a wall of gridlock. And it’s that desire to ‘get things done’ that makes every President behave more unilaterally than the one before. Speaking truthfully, Mr. Biden will be sorely tempted to use exactly the hardball tactics that Democrats have complained about.

But ironically, that gridlock is something I kinda envy here in Des Moines–I wish the minority here had more of a say in our City government.

What I object to here in Des Moines is that the current majority has engaged in exactly the tactics so many of us despise about the Federal government. Over time, they’ve changed Council rules and enabled a miserable level of *stonewalling from the administration. They play hardball.

Which just means that government is government. The issues of ethics, transparency and power are the same at all levels. And my watching Des Moines over the past twenty five years tells me that sooner or later, those issues always come back to bite.

But as I wondered before, maybe you don’t care about all them high-falutin’ ‘ethics’. Maybe just care about “getting ‘er done.” If so,  I am so screwed. 😀

So one big question I’ll be interested in next year is whether or not voters will care. I hope you will–even though you may be more interested in more day to day issues like roads or public safety.

Despite the tone of this article, I want to make it clear that I do not wake up every morning brimming with zeal for GOOD GOVERNMENT! 😀

I figured out a long time ago that we’d have to work on some of that  stuff first before we could ever have a chance to work on the more practical things I think you do care about: economic development, programs for the south end, a decent strategy for dealing with the airport (to name a few.)

There’s simply no way to get any of the things done that you told me you care about so long as there is no willingness to compromise or even engage other ideas.

In the meanwhile, I have a piece of unasked for advice: Try giving Mr. Biden a bit of a honeymoon (at least until the first major screw-up. 😀 ) He wasn’t my first choice either. But if we’re gonna recover from 2020, it’s gonna take each of us showing some willingness to bend a little.

Trust me, it sucks coming into a new position and running into a brick wall. 😉

*Just one example from this week’s meeting. We are being asked to vote for the Human Services Budget Funding this week on our Consent Agenda. The Consent Agenda, if you recall, is a list of items considered so routine as to require no debate. So ahead of the meeting, I did as I usually do, I asked for background information on the twenty two various programs–pretty basic, right? Here is the only reply I received from the City: