PSA: You may have heard that there is an election coming. There was a Candidate’s Forum October 14th and it wouldn’t hurt to watch it. Write me if you need a Voter’s Pamphlet: I have extras! And if you don’t get your ballot?  please email elections@kingcounty.gov or give them a call at 206-296-VOTE (8683). MONDAY IS THE LAST DAY TO REGISTER!

Tuesday: Port of Seattle regular Commission Meeting (Agenda) This meeting will present the 2021 Tax Levy. Their Budget proposes to increase  this item on your taxes by 3%, which I find outrageous given the pandemic.

Wednesday: Sea-Tac Airport Stakeholder Advisory Round Table (StART) Meeting (Agenda): The discussion will include the 2020 Legislative Agenda. Recognizing that this is also the Port’s agenda, it is fairly timid. I will testify as to the complete lack of understanding on Port Package ‘failures’.

Monday: Meeting with Finance Director Beth Anne Wroe. Not much to report on that in particular. Of greater concern is that fact that my City Manager literally refused to take a phone call to answer any questions on anything. Have I already used the word ‘outrageous’ in this article? 😀 That said, I mentioned last week that I wanted an improved web site like this and by using plucky initiative I’ve figured out what it would take to make it happen. One way or another, we are going to improve our public outreach during my time in office. Or I’ll… I’ll… I dunno what I’ll do. 😀

Tuesday: Burien Airport Committee. (On their web site I got to the meeting info in two clicks. Which made me happy. 🙂 )

Thursday: Economic Development Committee Meeting. (Agenda)  This was a big deal. There was a Buildable Lands Study that I could do 2,500 words on and some talk about the Marina redevelopment which also deserves some real talk, but I’ll save that for another time.

Saturday: McSorley Creek with Trout Unlimited. Yes, it’s that time of the year again: Counting the Salmon! Show up at 10:00AM if you want to be a counter. 🙂

Last week’s Economic Development Committee (EDC) and City Council Meetings (City’s recap here) were much more like what I expected when I ran for office. As you know, I ran as a ‘change’ candidate. I was able to convince enough voters that something had to change. But the job now is, in many ways, a lot harder because the things that need changing aren’t a bunch of evil men twirling their mustaches.

Des Moines has been heading in the wrong direction for a long time. Our government keeps doing things for short term benefit. But in the long run, have slowly lead further and further from making the City a ‘destination’ (to use that now tired cliche.) But because these policies often seem to make sense in the moment they have been difficult to change. They are well-intentioned; they’re just not in the City’s long-term best interest. It’s like telling me to lay off the ice cream when it’s right there on the counter. It’s a hard sell (sigh.)

You want it now

As I keep saying, a City is where the rubber meets the road. It’s the one place where voters actually expect responsiveness from government. And most voters are concerned with now, not ten years from now. When I moved here, everybody on my street had been here for two decades–and that was typical for homeowners in Des Moines. In 2020? The average homeowner sticks around for 5-7 years. So their interest is in ‘how can you help me now‘. Keep my taxes low. Keep me safe. And don’t rock the boat. I get it.

Unfortunately, many that thinking runs contrary to what it takes to make Des Moines (finally) live up to its potential as a waterfront community.

The reason I have been yammering about the PSRC and all this ‘regional’ junk since I got elected is because, in addition to the short term interests of current residents there are intense forces at the State and regional level which also push Des Moines to only consider the short view.

We are on the cusp of having to make development decisions that I guarantee most of you will not appreciate if you care about Des Moines more than a few years out. But they will be irresistible because a) they will provide short term cash and b) the State and PSRC will be nagging us to do them–and attempting to punish us if we do not.

I see one of my primary tasks to push back. Because this is existential for our future and I am not being hyperbolic. Our long-term desire to (finally) make Des Moines the historic and unique place it was meant to be run smack into the desires of many developers, the State, the County, the PSRC and the Port Of Seattle. They will offer us lots of things that look fabulous in the short term, but will inevitably lead to minimizing the very things that make Des Moines special. City Councils come and go, but overall, our development plan has been wrong since before decades. I will explain my positive vision for the City in detail in the months ahead.

The actual City Council Meeting was pretty innocuous. I want to highlight a couple of questions I had which probably seemed like me grousing a bit, but they matter. The first was in response to Traci Buxton’s comments on this thing:

We were asked to approve a directive clarifying our City’s position on SKHHP–essentially, giving Councilmember Buxton guidance on the City’s goals when *she represents us. Here is the guidance we approved:

Now that all looks pretty sensible, harmless and vague. But it matters because what I’ve been trying to tease out from our City is the actual purpose of SKHHP. The fact that we need to add this sort of ‘fluff’ indicates that there is not a clear agreement (yet) as to the goals–or at least a concern that the process might be hijacked. If so, I want to know what the goals of other Cities might be that could conflict with ours? The title of the group includes the word ‘homelessness’. Great. We should definitely tackle that problem. But though the two topics converge, affordable housing is not the same thing as ‘homelessness’. Not by a country mile.

What I keep trying to get at is: what are we willing to do? I want transparency. The problem is that the issues SKHHP needs to tackle are, like all land use and zoning and housing issues totally nuclear divisive. I get why decision makers would want to keep it vague until the last possible moment. But I would much prefer that we do work to get buy-in from our residents up front, rather than working on programs that may come as a unpleasant surprises down the road. That is exactly what went wrong with the Woodmont Recovery Clinic. It was a noble cause (helping people climb out of addiction) but it was implemented in a way to generate maximum †FUD.

Show me the numbers

The second question I had was during the Budget Public Hearing and was about ‘trends’. I referred to page 49 of the 2021 Preliminary Annual Budget , which is the only place in the document that charts a five year forecast. 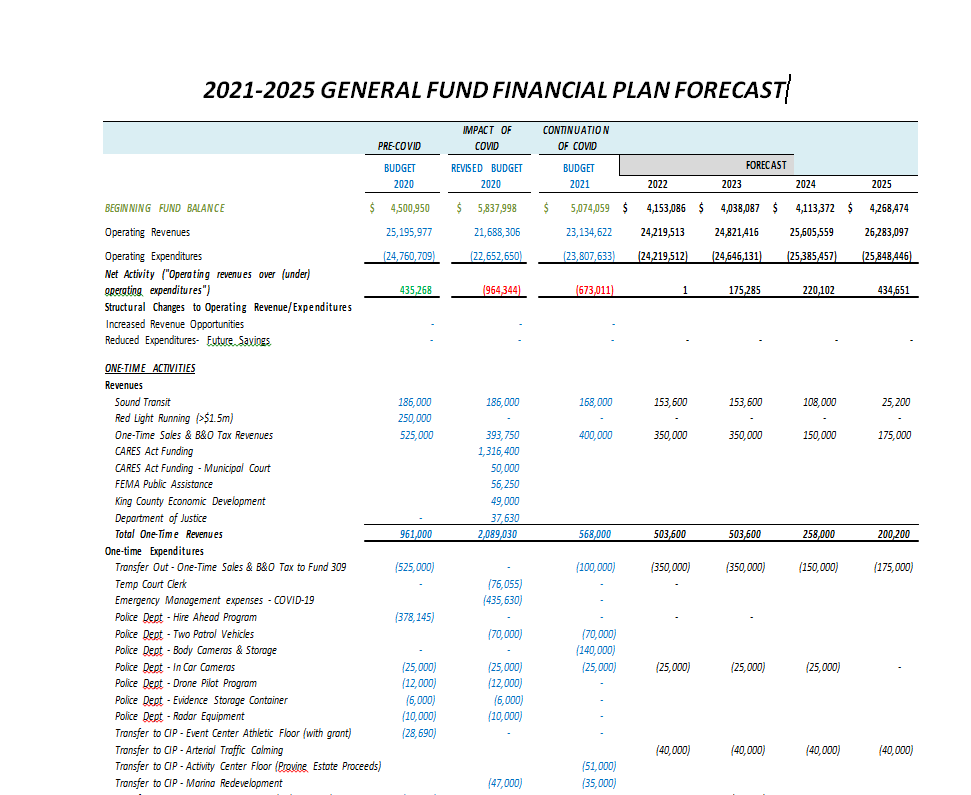 I asked what I thought was a fairly easy question: How do you make that forecast? Now check out the responses from our City Manager.

Now that you’ve watched that exchange, do you have any idea how the City estimates 2023, 2024, 2025? If so, please email me. Because I sure don’t. It’s the defensiveness that always gets my antennae up. I asked a perfectly reasonable question and got nowhere. And the end of the discussion was our Mayor saying, “Asked and answered.” As if this were a trial, not a reasonable discussion.

I’m not here to cross-examine anyone. I just wanted to know what any business person would want to know: What are your assumptions? It turned something routine into even more *FUD and I can never understand why. If they’d simply give me the information I request, I’d be happy as a clam. 🙂

You gotta sell me on this…

We often hear from candidates how they want to run government ‘like a business’. Our Mayor often talks about how the City Of Des Moines is structured like a Corporation. It’s not ‘like’ a corporation it is a corporation.

But municipal corporations are not  businesses. And definitely not when it comes to decision making. Yeah, you get to vote for City Council, but beyond that, the government gets to ram an awful lot of stuff down yer throat if it wants to. If it were a business, it would have to actually sell you on its ideas. It would have to market like crazy to get your buy-in on plans that you won’t necessarily like right now, but will ultimately make your life better ten years from now on.

Governments are not known for being particularly good marketers and the public often refuses to eat their vegetables. And more and more the public is interested in the short term. So it’s just a lot simpler for the government to do what it wants and not bother asking.

I strongly disagree. We have the obligation to be very clear on both the good and the painful parts of our policies. We should sell difficult ideas and only act unilaterally when absolutely necessary.

Am I talking out of both sides of my mouth? Sure thing. I’m a low rent politician. 😀 I’m going to propose a lot of ideas that you may find challenging in the short term. Because I’m certain these are things that will make Des Moines really special for you in the long term. And I’m also going to work my bananas off to get your sincere buy in. That salesmanship is something the City has not done well at all over the years–because, again, it doesn’t have to ask for permission. It doesn’t have to sell you. To the extent I can, I hope to change that approach.

*Minor detail: I am the City’s Alternate Representative to SKHHP. To date I have not been invited to any meetings or notified on any of its activities. I’ve already used ‘outrageous’ and ‘unprofessional’. Thank goodness I’m done with this article. I’m running out of adjectives. 😀