So, the nice people at Destination Des Moines and the Des Moines Legacy Foundation put together this Restaurant Flyer. I’ll be talking more with them and Seatte South Side Chamber Of Commerce about how to get it out to the entire region. I’d like to see this placed everywhere within five miles of Des Moines and beyond. We have a one-pager you can place in your window or a tri-fold brochure for point-of-sale. Please contact me for details. I’m also hoping the City will formally get behind it.  The City Of Des Moines needs a formal promotional campaign. Not just during this emergency but on an ongoing basis. We need to be selling Des Moines! 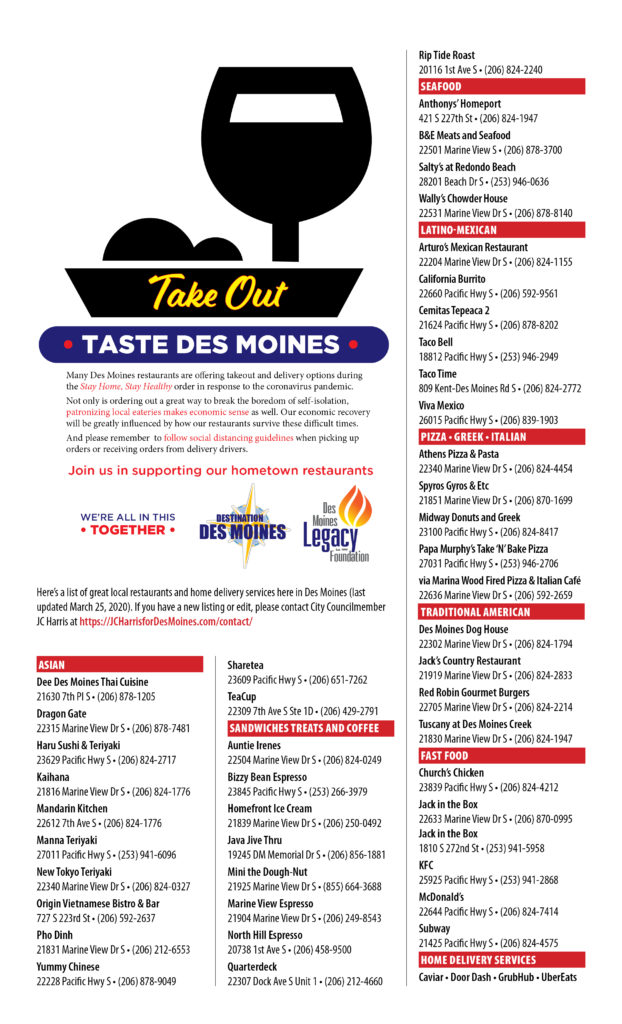 Thursday will be another telephone City Council Meeting at the extra special time of 5pm. Why 5pm? Not a clue. Why a curtailed agenda? Not a clue. As I’ve reported, the Governor’s recent changes to OPMA rules makes such a constrained agenda unnecessary. And frankly, I’m getting concerned because other cities are starting to report real problems: https://komonews.com/news/local/tukwila-mulls-worker-wage-cuts-to-offset-steep-losses-from-coronavirus. I got some eye rolls a month ago when I started worrying about finances, but this is no joke. Our City Council has not had any report on the real and projected impacts of COVID-19 and it’s past time.

I spent four days volunteering at the Food Bank in the afternoon. I had a couple of talks with Director Kris Van Gasken and Barb Shimizu. A couple of facts: The City used to give $40,000 a year to the Food Bank. We now give around $32k. But $40k, in 2020 dollars is more like $60k. So we are actually currently giving the Food Bank about half of what we used to. However, with the COVID-19 thing, the number of new clients they are now seeing has doubled in the past two weeks–and is expected to stay at that level for the next several months (have you checked the unemployment numbers recently?) The Food Bank’s most immediate need is volunteers. Because of the high volume, they are now doing a lot of ‘grab n go’ meals–which means they need workers to help prep those all day. They also need PPEs and cleaning supplies. Those items are in particularly short supply. They are on the EOC list (see below), but there is such a backlog that they probably can’t expect help any time soon. They also need donations. Let’s get real: ‘Donations’ are a great thing. But there is no way that public small dollar donations can make up for this kind of increase.

One other thing about the Food Bank: School is now basically over this year. Over two thirds of our children are on ‘free lunch’ programs. So who fills in the gap when those programs go away? The Food Bank. They are feeding our children. And it ain’t in their budget.

It is proper for the City to step in at this time. And if you can donate, please do so at the Food Bank web site.

On Thursday I visited the new Joint Emergency Operations Center (JEOC). Which is a room at the Fire Station at 223rd and 24th. 🙂 (Every City has some form of ’emergency operations center’, which coordinates with a County EOC and then a State EOC and then the Feds as the chain of command in any declared emergency scenario.) I spoke with Police Chief Ken Thomas and Fire Chief Vic Pennington. I had no idea what this thing is about. Currently it’s mostly about monitoring the growth of the outbreak here. Thankfully, we’re doing a much better job battling COVID-19 here than many other places  (more below) so there’s less to react to. But one thing they’re really concerned about is, what to do if the first responders start getting sick. Just as with hospitals, people on the front line tend to be the ones who will get sick. So you need a plan to provide continuity of fire, rescue and police–even if a significant portion of those workers test positive.

One thing: I was dismayed to hear from Chief Thomas that efforts on social distancing are still not great. The moment the sun comes out? People go nuts. And worse still, they’ve already had a few ‘compliance issues’ (ie. when the policemen asks you nicely to disperse you refuse.) I can’t imagine that level of disregard for our police (never mind the stupidity from a health perspective.) So I want to thank the Des Moines Police Department for their extra professionalism during this very challenging time. It can’t be easy.

On Thursday I also had a phone call with our State Reps. from the 30th District and got an update on what the State response is to COVID-19. Our lobbyist Anthony Hemstad pointed out the shortage of PPEs for first-responders. I was begging for that same gear for volunteers at the Food Bank. I also asked for consideration for a State moratorium on late fees–not just for residents, but for businesses as well. After seeing what happened to our small business community in the 2008 Great Recession, I’m very concerned for the small businesses in Des Moines. Rep. Pellicciotti pointed out that the Governor’s ban on evictions had a specific note on price gouging. While not a ban on ‘late fees’ per se, it does make it illegal to tack on extra costs of any kind during this emergency. So if you feel that has happened to you, please let me know!

On Friday, I attended a conference call with Congressman Adam Smith. There was great information on SBA Coronavirus Loans. If you have any business, even sole-proprietors and  non-profit you need to check these out! One tiny ‘silver lining’ to this whole crisis is that there will be a second stimulus package and there will be a piece that targets small cities like ours. Fingers crossed.

So the novelty of this whole ‘social distancing’ thing is wearing off. I’m noticing that people are definitely not trying as hard as they were a week ago. I’m especially unnerved to seeing young parents having ‘play dates’ everywhere I go. I can’t stress enough that it is the next two weeks that are going to be the worst (at least nationwide). All the ‘modeling’ says so and ya know, for all of those who are constantly going on about ‘modeling’, guess what: It’s been remarkably accurate so far. (As a former stats guy I get a bit defensive about this sort of thing. 😀 ) What I’m saying is that now is not the time to relax and get sloppy. The boredom and increasing level of annoyance you’re feeling only means that we’re succeeding.

This is real for me: I’ve had three friends die of COVID-19 in the past week. Because of work I made many friends in New York and New Orleans–two of the hardest hit cities in America. What is really notable is that two of these guys were younger  than me. If you recall, New York started getting cases only slightly after we did. But we acted far more aggressively than they did and waaaaaaaay more aggressively than Louisiana. So we are now reaping the benefits. Does it absolutely blow to see all the economic devastation? For sure. But compared to… oh I dunno, DEATH? Not so much So, please try to hang in there. In fact, don’t just ‘hang’, try to step it up a bit. It’s really working.

One really good news I got this week is that wide-spread testing may be coming fairly soon–and when that happens, places like Des Moines that are doing well may be able to get back to work ahead of the other areas that aren’t. In other words, we may not have to wait for the entire country to heal before we can get back to work. Again: Fingers crossed.