I got the following message from a resident the morning after our last City Council Meeting :

“It looks like you guys were getting along. What happened?” 😀

I can only speak for myself: I self-censored. I avoided several uncomfortable conversations that should be happening. Frankly, some nights? I just don’t feel like fighting.

Not to bring up unpleasant history, but hearken back to our September 7, 2017 meeting. One of the first things our City Manager did after being promoted was to establish a separate director-level Emergency Management position and head to Maryland along with the Mayor and staff for a week of Emergency Preparedness Training. There was a lot of discussion about making Des Moines the regional leader in emergency preparedness given various risks and our strategic location (earthquake, shoreline, proximity to freeways, airport, etc.) 1We’ve put a lot of money into this program.

Now, it may sound like I’m a bit bitter 😀 but last April I got reamed by Mayor Pina and then Deputy Mayor Mahoney for  being ‘disrespectful’ of our Emergency Operations Center, our staff, the City Of Des Moines–and probably Santa Claus.  Actually, I did nothing of the kind. I was simply asking questions about the program because the City made such a big deal about our exceptional investment in it.

Fifteen months after the declaration, and despite a four year specially-dedicated Emergency Management program, we have not performed much differently than our sister cities in responding to COVID-19. We were slower than other cities to shut down various functions and convert to remote functionality and we’ve been slower now to re-open to the public. 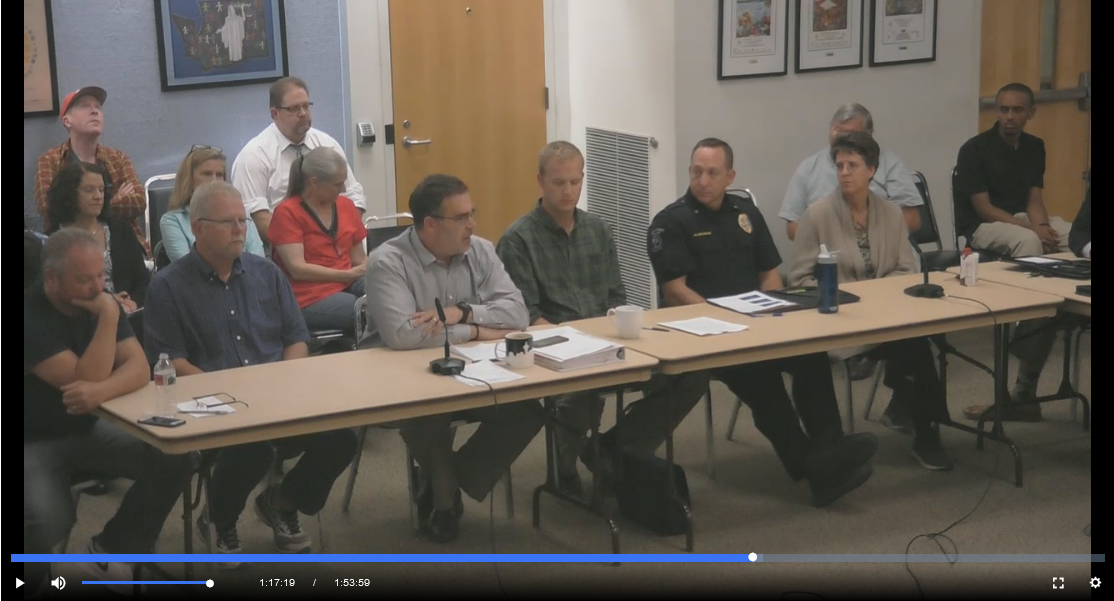 OK, here is a 5piccie from that 2017 meeting. Forget that I’m counting ceiling tiles in back. What COO Dan Brewer is saying in that exact moment is that the City needs to be in constant preparation, not just for ‘disasters’ but weather events.

So now, after all this effort, when I see us not have a plan in place for a hot day (which was predicted a week in advance) and the administration basically says, “Well, who knew, right?” I have even more questions.

Because other cities, who do not have dedicated EM departments,  did have cooling centers ready to go.

This is no joke. We have a large vulnerable population (including a lot of  seniors who are not in air conditioned settings.)  And in my opinion, extreme heat events are things we should already have plans for. We already have detailed plans for ‘Snowmageddon’, right?

Look, it was fantastic that State Rep. Orwall was able to work with Highline College to open up on that Monday. And it’s great that 85 people were helped that day. But it should also be reasonable to ask: Given our Emergency Management program, why did we even need that special intervention?

I don’t want to pile on here, but I get calls and messages several times a week now along the lines of, “Why isn’t (x) facility open? Other Cities are doing (y) so  1WTF, Dude?” And I have exactly the same questions.

I voted for the Street Racing Ordinance. I even seconded Mayor Pina’s motion to increase the fine for this Civil Infraction from $256 to $513. I am generally not in favor of heavy penalties unless there is actual data to show that it has a deterrent effect. But as I said from the dais, my former company worked with the ‘performance community’, I’ve been to their conventions, and these people are invested in their cars and their hobby. As with fireworks–they’re well-aware of the illegality. And by the way, a Civil Infraction is not a criminal offense.

Whenever proposing an ordinance, the administration almost always tacks on an amendment to suspend Rule 26a. And I always vote against that.

By default, all ordinances require a second reading before taking effect–meaning that there need to be two separate votes at two meetings for it to take effect. In my opinion, we should never pass an ordinance without a second reading unless it is a true emergency for this reason: public engagement. Often times, the public only hears about a Council action because of that first reading. I want the public to have every possible opportunity to weigh in. I can’t tell you the number of times someone has given me some suggestion on legislation–only after it was enacted. The second reading gives the Council a final chance to refine the law.

I did not feel like it was a true emergency in this case because before the meeting I asked to see if there was any intelligence to indicate there might be upcoming racing events. Nope.

One thing I wanted to highlight during the discussion is that, under State law, the burden of proof to prosecute is crazy high. And I don’t think the public understands this. You have to be able to ID the driver, not merely the automobile, in order to obtain a conviction. It is not good enough for a bystander to simply take video of a guy speeding by (or some unidentifiable person lighting off fireworks for that matter) and agree to be testify later. So unless a sworn officer just happens to be in the neighbourhood, good luck. Which is exactly why I want more neighbourhood policing.

My primary interest in the ordinance was to get signs placed at key points (like the start and end points in Redondo) announcing the ordinance and the penalty. I had calls and messages from several residents asking for this and I was very pleased that my colleagues, specifically Councilmember Bangs provided their support. It may turn out that signage is a bigger deterrent than the actual ordinance.

I had at least half a dozen letters and messages complaining about personal fireworks. I had planned to ask the Chief about it at this meeting, however neither the Chief or other PD official were present. This is unusual because a representative of the PD attends almost every meeting to take questions.

All my colleagues (and I) took pains to express our gratitude for the hard work of our Officers on Independence Day. A couple went so far as to say how much quieter things were where they lived.  But that was definitely not my experience living near the old Des Moines Elementary School.

What I wanted to ask the Chief directly was:

For me, the point of the increased patrols is as much about data gathering as it is enforcement. I expected more activity this year after the pandemic. But we need to have a sense of how we’re doing year on year. Remember: it costs money. So we need metrics on ROI.

I want to be able to gauge the efficacy of the increased enforcement. Is it going to reduce personal fireworks long term? Do we need to do more? If so, what? Or should we just stay the course? As a Council we should have gotten some sense of this from the administration and we got nothing.

To be blunt, it is simply not possible with the current Council to ask these kinds of very reasonable questions–the ones that residents ask me about all the time. Because when I do, there is retaliation–as there was about the EOC last year. To ask any question which  that sounds ‘critical’,  that City might have done better on a particular task is to be told that one is ‘un-supportive’ or ‘running down the City’ or worse.

In reality, direct inquiry is basic oversight and at the core of the job of Councilmember. And again, all the questions I’ve listed above are questions that the Council gets. All the time.

I want a City Council that fosters a climate where every member can ask such questions of staff and feel the full support of the entire Council.

My current colleagues and the City Manager take great pains to show support for our staff and to always paint our City in the best possible light. Good. Portraying a positive image of the City is important; as is creating a positive work environment. And for the billionth time: I never want staff to feel unappreciated or attacked.

But in the future I want to have discussions that focus just a bit less on “Great job guys!” and more like “What could we have done better?”

Because you can always do better. There are always lessons to be learned and the City Council Meetings are the public venue to have those discussions.

There’s an expression I’ve heard many times since I’ve lived in Des Moines to account for the unwillingness to have frank open discussions. It’s referred to as ‘the Thanksgiving Table’. No one wants to say anything that anyone might find unpleasant–so as not to upset the meal.

But City Council meetings are not family gatherings, they’re supposed to be inquiries leading to serious, well-informed decisions. The goal is neither to court or to avoid conflict, it’s simply to get at the truth. But over time, we’ve slowly made ‘asking questions’ itself into being somehow impolite, “Oh we don’t want to talk about that at the dinner table!”

Here’s the thing. 2When beginning their campaigns, candidates are always counseled to ‘be positive’. Talk about the good things, never go negative.

Plus, the public definitely is sick of the arguing and bad conduct.

So newly elected CMs generally have no 4model or incentives towards true debate. We’ve demonized any disagreement, either with fellow CMs, or especially the administration, as being somehow intrinsically bad for the City. They may not understand just how critical it is for every CM to have each other’s back so as to never allow the administration the ability to play favorites.

In one sentence, my concern is that even new candidates will come in and unconsciously continue the ‘Thanksgiving Table’ pattern of self-censorship. Because that’s all they know.

So to any new candidates who come to the Council next January: I will always have your back if you want to raise a concern, whether I agree or not.

1And let me be clear: I fully supported this concept. I wrote a detailed letter to the new City Manager after that meeting, asking him to consider the potential importance of the boating community for any disaster planning.

2OK, seniors generally do not express themselves like that in Des Moines. But inside, they feel, it baby. 😀

3Yeah, I totally didn’t do that

4Well, unless they are obsessives like this guy (or moi) who regularly attend City Council meetings all over the place.

5That’s Traci Buxton and Harry Steinmetz who were competing for Position 5. Candidates all tend to start showing up for a few meetings around August. That’s how you can tell it’s an election year. 😀