It’s always great to begin with an alliteration, right? 😀

This article explains why I objected to the Consent Agenda at the 7 May City Council Meeting which caused something of a ‘consent agenda kerfuffle’ and then goes on to discuss the importance of ‘Minutes’.

I do get hate mail after every meeting. 😀 It’s generally from the same people every time and generally harmless. In this case the complaint had to do with the fact that I voted ‘no’ on the Unanimous Consent Agenda (UCA), which caused a tedious extension to the meeting. To recap: the whole point of a Consent Agenda is to save time–the group simply votes up/down on a list of (supposedly) uncontentious items. What people often omit is the word ‘unanimous’. The group has to show its agreement that these are routine items by voting unanimously. By voting ‘nay’, I broke that process.

Did I intend to cause this kerfuffle? Of course not. I don’t show up with goofy plans to annoy the majority. But I gotta say, it was fascinating from a procedural standpoint. And I have to give props to City Attorney Tim George. I honestly don’t know, but I think he could have interrupted the meeting right when I voted ‘no’ and pointed out what the effect would be. But for whatever reason, he let things play out and I really appreciate it. If he had spoken up, it would’ve put pressure on me to vote ‘Yes’.

Now, here’s why I voted no. Item #2 on the Consent Agenda  was to approve the Minutes of prior meetings. ‘Minutes’ should be the least controversial part of the UCA. It’s just a summary of the meeting. In fact, we use what are called action minutes, which means the clerk provides a very short (often one-line) descriptor of what was done but not all the talking.

OK, so here are the Minutes for Councilmember Comments from the 9 April General City Council Meeting: 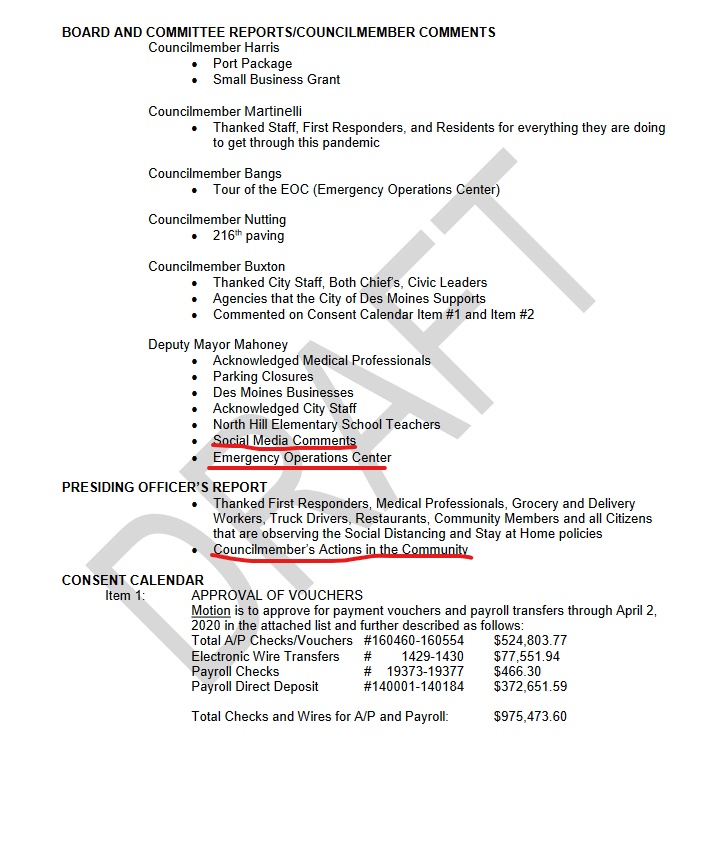 Pretty dull, right? Now please refer back to the 9 April City Council Meeting Video. And (finally) we get to my point. And please understand I am not being petty here. This really matters to me and I hope I can convince you that it should matter to the City.

Where Deputy Mayor Mahoney talks about “social media comments” and “emergency operations center” what he was actually doing on the video was taking five minutes to ream me out. Similarly, the Mayor’s “Councilmember’s Actions in the Community” was actually an almost ten minute list of complaints against moi.

I will always want the Minutes to reflect what really happened. So I was prepared to make the following motion:

I move to modify the April 9th Agenda as follows:

Because that is what actually happened.

Now, why do I give a shit about something so apparently picayune? Am I really that petty? Nope. Very few people in King County actually read these things. I’ve read hundreds of Minutes from hundreds of meetings over the years in doing my research on Sea-Tac Airport. And if the Minutes don’t reflect what really happened? History is screwed. Until HAL 9000 allows for people to do keyword searches on video, it is virtually impossible to find information on a particular public meeting video unless you know ahead of time what you’re looking for. Having those descriptions be meaningful doesn’t seem to matter until you have to actually try and find something. Then, if you are a researcher or a reporter it’s imperative. So I take this deadly seriously.

(I leave it as an exercise for the reader to review Minutes from key past meetings of various City Councils and the Port. Eg. virtually every meeting near the end of Don Wasson’s time or at the Port near the end of CEO Yoshitani’s tenure. From the Minutes alone you might not know much was wrong.)

Descriptions are sanitized with perfectly good intent–to be polite, of course. Which is lovely. But I don’t want polite. I want what actually happened: good, bad or ugly. Not just in this case, but in every case, regardless of who is involved.

Now, if I feel that strongly about it, why didn’t I raise the motion? Wait for it… to be polite, of course. 😀 Seriously. The meeting had already gone on three hours, it would’ve started an argument, some of the Councilmembers were visibly close to blowing a gasket so I let it go. But if I’d had the votes? I would’ve gone ahead, regardless of the blood pressures of my colleagues.

2 thoughts on “Why Meeting Minutes Matter”